Durg city located in the south-western part of the Chhattisgarh is nestled amongst the majestic hills on the south-west and north-west sides. One of the most visited & popular tourist destinations of Chhattisgarh state it offers something for everyone. Its distinct rich cultural heritage dates back to hundreds of years. The region is known for its enchanting traditional folk dances -The Raut Nacha & Pandwani which are unique to this place. Though a major industrial town Durg is also endowed with a number of tourist attractions like ancient Temples, beautiful Gardens, refreshing Fountains, Zoo, etc. 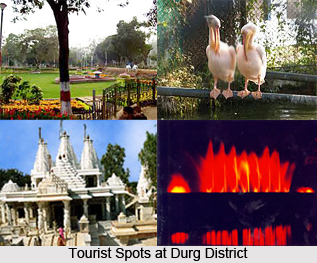 Durg is also famous for the Bhilai Iron & Steel Plant located nearby which people come to visit from far & near. Another not to be missed attraction of Durg is the Maitri Bagh or Friendship Garden as it is called which is a beautiful garden jointly developed by India & Russia. The Garden boosts of a Zoo with a number of rare wildlife species, a Lake and a Toy Train. The famous Jain Shrine of Parshwanath Tirth at Nagpura, Ganga Maiya Temple at Jhalmala, Deorbhijia Temple, etc. make the city of Durg an important pilgrimage centre where devotees come in large numbers to pay their homage to the divine. Durg is also a must visit place for hikers' and bird watchers' as it offers plenty of adventure & outdoor activities. So do plan a visit to this fascinating city of Durg and experience a unique, unforgettable and enchanting holiday trip.

Best Time to Visit: Durg being quiet hot in summers the best time to visit this intriguing city is between October to March.


Famous Tourist Destinations In & Around Durg

Chandi Mata Mandir
Situated in the centre of Durg city Chandi Mandir is a famous pilgrimage place. The temple is built to pay homage to Chandi Mata who is worshipped by the residents of Durg & nearby places. The Goddess Chandi is associated both with good fortune as well as with disaster. It is known in different forms like Mangal Chandi, Sankat Mangal Chandi which are considered to be auspicious and bestow joy, riches, children, and victory in battles. Devotees from far & near visit this temple to seek the blessings of the Chandi Mata.

Shri Uwassaggaharam Parshwa Tirth or Jain Temples in Nagpura
The famous Jain Temples of Nagpura located on the banks of Sheonath River in Durg . Established long back in the year 1995 the temples are known for their grand construction & beautiful carvings. The temples are dedicated to the worship of Shri Parshwanath and pilgrimages throng to this place to pay their homage to this divine soul. The entrance to the glorious marble temple is through a 30 feet gate that has an idol of Parshwanath being worshipped by two elephants and is supported by four pillars. The majestic pillars symbolise the four essentials of spiritual atonement which are wisdom, introspection, good conduct & penance. Amiya or the sacred water seeps out from the idol. This temple is quiet popular among the devotees and hundreds of them visit this shrine especially on full-moon day. The temple premises comprises of temples, guest houses, a garden and a Naturopathy & Yoga Centre. Patients from various parts of the country come here in search of alternative or naturopathy treatment. So come visit this place & get enchanted by its pious & serene envoirment. 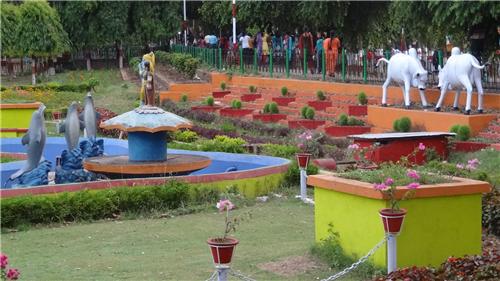 A beautiful sight the mountain interprets the style and rhythm of the music being played and performs accordingly leaving the visitors spellbound. The beautifully illuminated water lit by hundreds of lights in rich vibrant colours is a sight to watch. Streams of water shoot in the air and twist & sway along with the beats of the music each movement highlighted by brilliant lighting. On every alternate day 2 shows are organized in the evenings for the visitors. A flower show is also held here every year which is quiet popular among the local residents & the tourists coming to the city. If you are a nature lover, a bird watcher or just want to have some good time; do visit Maitri Bagh in Durg to have a wonderful time.

Hindi Bhawan/ Durg District Court
These are historical buildings built during the British era with a British style of architecture. Hindi Bhawan is now being used as a Nagar Nigam office; people come to see the old architectural style. The building still stands sturdy & strong. 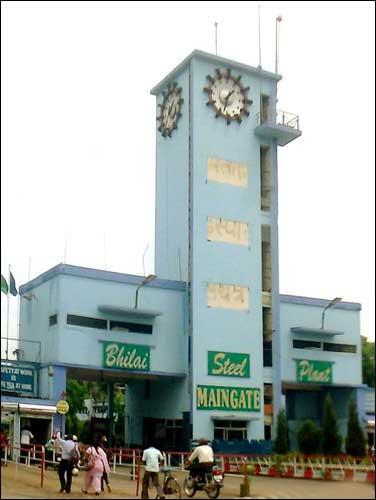 Bhilai Steel Plant (SAIL) is the second largest city in Chhattisgarh having one of the largest integrated steel plants in the world; the entire economy of the town revolves around the Steel Plant. Tourists coming here take a tour of the plant and marvel at the latest technology being used and the growth India has made in becoming a self reliant country.

Patan
A part of Durg district - Patan is a small town and a Nagar Panchayat. Patan showcases a unique fusion of tribal culture, traditional folk-art and breath-taking natural scenery. Fire lake is the major attraction in Patan and people come to see it from nearby palces.

Devobaloda
About 3kms from Bhilai there is an ancient temple of Shiva built during the 11th-12th century AD; located at Deobalod, the Shiva temple has a sculptured panel and a unique style of construction. Devotees come here to pay homage to Lord Shiva, and there is quiet a rush on the auspicious day of Shivratri.

Dhamdha
Dhamda is a popular tourist spot located 45 kms down the Durg - Bemetara Road. A grand old palace called Prachin Kila is present in Dhamdha which is of historical importance. A place of worship which is quiet famous among the local residents is also present near the Kila. Easily available & well maintained boarding and lodging facilities are available here which attract tourists in large numbers to this tourist place.

Balod
Situated about 80 kms away from Durg is Balod which has a number of beautiful temples. Sati Chabutra is a famous temple dedicated to the old-age custom of Sati. Nearly 20 kms from Balod is another temple Siyadevi or Sita Maiya’s Mandir which has been constructed in the mid of a lush green forest. From the months of July till February a waterfall becomes active here lending an unparalleled beauty to the place. A beautiful lake is present called the Kapileshvar lake is present near the waterfall.

Tandula
Nearly 70 kms from Durg is the scenic Tandula Dam; the dam was built at the confluence of Tandula & Sukha Nala Rivers in the year 1921. The dam has the capacity to store water with a catchment area of 827.2 km2. The reservoir has about 312.25 million cubic metres of gross storage capacity. A scenic place with greenery spread all around and the fresh water flowing around it has become a popular picnic spot for the local residents & the tourists coming to the region.

Ganga Maiya Temple
Located, 58 km from Durg at Jhalmala it is a quiet a popular religious place for the natives of the region. As per ancient folklores an interesting story prevails about the origin of this temple; it is believed that a fisherman found an idol in his net while fishing in a pond near the village. The fisherman immersed it back in the pond but it kept coming back in his net; tired & fed up he left it there and went back to his home. In the night he dreamt that a Goddess was saying to him that 'don’t ignore me take me out and install me at a place'. The fisherman in awe took out the idol next day & established it with full religious rituals in a hut near the pond. Bhikam Chand Tawri later on built a more permanent temple at that place and the temple was thus called Ganga Maiya Temple. The temple trust regularly organises various cultural activities and medical camps in the village. The local residents regularly visit the temple to seek divine blessings.


How to Reach Durg ? 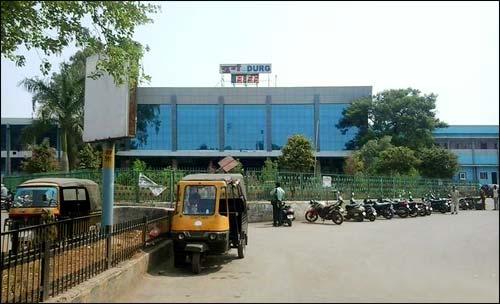 Durg is well connected with a network of roads & railways. A number of State & National Highways connect one place of the district with other regions. Durg lies on National Highway No. - 6 (GE Road) and is connected to nearby places like Nagpur & Raipur (Capital of Chhattisgarh) by road. Lying on the Mumbai-Howrah main line; one can reach Durg by Train from Delhi, Nagpur, Mumbai and Chennai. Durg Railway Station is an important junction with a number of trains passing through the region. The nearest airport is Raipur which is at a distance about 54 KM and one can take direct flights to the cities of Delhi, Mumbai, Nagpur, Kolkata, Bhubneshwar, Chennai and Ranchi. For local transportation one can opt from a number of auto-rickshaws and cycle-rickshaws plying in the city.


Where to Stay in Durg ?

Durg being an important industrial town and agriculture hub along with being well connected by Rail, Air & Road attracts tourists a large number of tourists. Hotels & Guest houses are spread across the city to suit all budgets. These hotels offer all basic facilities to make your stay comfortable. Some of the available hotels in Durg district are:

So come and visit this intriguing city of Durg, have a comfortable stay in the various hotels and guest houses present in the city. Get soaked in its rich & colourful history, beautiful parks and divine religious ambience which the city has to offer. Grab a short break from your daily routine activities to feel relaxed & rejuvenated again, away from all the stress and tensions. Spend some quality time with family & friends and gather beautiful memories which will last you a lifetime. A number of tourist attractions are present in & around the Durg , where one can go for a short vacation of 2-3 days. These places give you a glimpse of the local art & craft, the traditional folk dances which are unique to this region of India.