Art and Culture of Durg

Durg has a rich cultural heritage which is an integration of various traditions. The people of the city are simple folks whose hospitality & warmness leaves an everlasting impression on the tourists. Though rapidly growing into a modern city the old traditions & folk- art still hold a place of importance here. Traditional Art & culture is much respected in Durg and forms an integral part of the lives of the local people. Teejan Bai, the the reputed artist of Pandwani dance form belongs to Durg region. 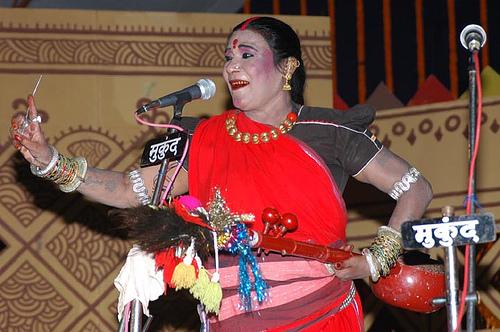 Hinduism, Jainism, Buddhism, Islam & Christianity are the main religions being followed in Durg, along with a considerable number of tribal population. People belonging to different religions live here in complete harmony & display a spirit of brotherhood. The population in the Durg region is a mix or rural, urban & tribal people. Hindi is predominantly the language of choice for the urban population of the region; though amongst the rural & tribal population Chhattisgarhi is the preferred language. Though Telgu, Kosali and Oriya are also spoken by some residents of the district. Hindi being the national language is the official language for usage in all governmental and administrative purposes.

Durg has been home to many tribal communities which have played a major role in influencing the art and culture of the place. Ethnic clothes in rich & vibrant colours and intriguing customs of the native people have been a source of tourist’s attraction since ages. Special occasions like festivals, weddings & community celebrations are celebrated by dancing to the tunes of the folk music. The traditional rhythmic dance & drama provide an insight into the culture of the region and are a treat to watch. The dance forms also portray the artistic skills & creative imagination of the talented performers who are doing their best to keep the old-age traditions alive. Pandwani is the most famous dance-drama of Durg and the adjoining regions. Some of the other famous dance forms of the region include Raut Nacha (folk dance of cowherds), the Panthi and Soowa.

Pandwani, a type of folk ballad that depicts the story of the Pandavas is the main art form of Durg.
Predominantly performed in Durg region the folk-dance is narrated in a very lively form scene by scene mesmerising the audience. Pandwani dance form mainly consists of two styles of narration ones is Vedamati and the other is Kapalik. When the lead artist narrates in a simple manner and keeps sitting on the floor throughout the performance it is called the Vedamati style. While in Kapalik style the narrator enacts the scenes and characters making it a more is livelier performance.The most famous performer of Pandawani in the Kapalik style till date is Teejan Bai who belongs to the Ganiyari Village of Durg district. She has immensely contributed in popularizing Pandawani dance form in India and Overseas.

Another famous artist of Pandawani - Kapalik style is Ritu Verma from Raubandha, Bhilai who has been travelling all around the world for promoting this dance form. The Vedamati style of Pandawani is being performed by an accomplished Shri Poona Ram Nisad, from Ringani Village of Durg. Her dedication to this traditional art is commendable and she has been awarded with Padambhoosan for the same.

Another very famous dance form Raut Nacha reflects the religious feelings of the cowherds. It is performed to worship Lord Krishna at the time of 'dev Udhni Ekadashi' (awakening of Gods on the eleventh day after Diwali) by the yadavs/yaduvanshis community. In Raut Nacha the dancers enact the scene of the fierce battle between King Khansa and the cowherds who belonged to the Yadav community. It is believed that the Yadavs or the cowherds had the divine support of Lord Krishna & the dance form re-emphasises the triumph of good over evil. 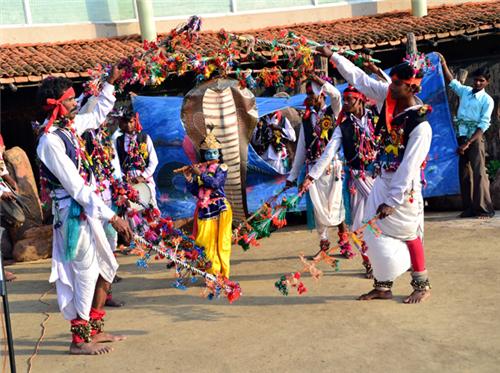 The talented artists dressed in their traditional & colourful attire use props like long sticks and shields to enact the scenes of the battlefields with such mastery that it looks almost realistic. The spell-binding dance performance is accompanied with playing of several musical instruments and folk music, coupled with a mesmerising light and sound effect transforming you to an era gone by. Raut Nacha as a dance form has added to the glory & grandeur of the Durg region drawing many tourists to this place.

Popular among the tribal communities of Durg district the Panthi dance form leaves the audience spellbound. This form of dance is performed by the Satnami community and has religious beliefs; they install an idol of Jaitkham and perform this dance on festivals and other special occasions. On the birth anniversary of Guru Baba Ghasidas- Maghi Purnima this dance is performed. Traditional music instruments like Mridang, Mandar Drum & Jhanjh are played, initially starting with slow tunes & gradually increasing the rhythm & tempo. Panthi is a group dance form initiated by the main performer and then followed by the rest of the dance members who dance to beat of the music with arms swinging around and forming human pyramids. Reflecting the Nirvana philosophy, the songs convey the spirit of renunciation of the Guru and teachings of saint poets like Ramdas, Kabir etc. The dancers carried away by their devotion dance with great enthusiasm and fervour keeping alive their rich traditional values & folklore.

Soowa Nach is also a popular folk dance form of the Durg region, mainly performed by the tribal people. This dance from is also known as the Parrot Dance because the tribal women folk keep a parrot, in the center and dance around it. This dance is performed by tribal women to worship the tribal deities. The parrot is kept in bamboo pot and the dancers dance in a circle around it; singing, clapping and performing with gay abandon. Sonha Bihan, Lorik- Chanda Soowa, Panthi, Kari , Rahas, etc. are some of other famous dance forms of Durg region which are performed with great fervour & joy on festivals and special occasions.

Durg is a treasure of traditional art and crafts and the local people are constantly striving to keep the culture alive. One can buy souvenir of Kosa silk” and Dhokra art for which the region is famous for. The unique and diverse forms of arts and crafts like metal & brass work can leave you awestruck and captivated. The handicrafts give the tourists a glimpse into the region’s rich artistic & aesthetic heritage. If interested in buying ethnic tribal handicrafts, ornaments or clothing one can esquire from the local people or explore the narrow by-lanes, weekly haat or local bazaars of Durg District.

So right from the rich culture & tradition to the intriguing historical attractions, Durg offers a glimpse of all making it a favorite tourist spot for the people who love to travel & explore different places of India.