Durg is the third largest district of Chhattisgarh state and is situated on the eastern bank of river Shivnath. Presently it is a part of Durg-Bhilai urban agglomeration which includes Durg-Bhilainagar Urban Agglomeration includes: Durg (Municipal Corporation), Bhilai Nagar (Municipal Corporation Dumar Dih (Part) (OG), Bhilai Charoda, Jamul, Kumhariand Utai. Durg being an important industrial town offers many employment opportunities making it a densely populated city. According to the 2011 census, the city has an estimated population of 17, 21,726, including 6, 17,184 of rural and 11,04,542 of urban population. Located in South-Western region of the Upper Sheonath-Mahanadi valley the Durg District can be divided into two divisions the Chhattisgarh plain & the Southern Plateau. The city is endowed with abundant natural beauty, rich mineral resources and a traditional tribal culture. Brass and Bell-Metal Working, Oil Pressing, Mining & Weaving are some of the important industries of Durg due to which it has become an important centre for trade & commerce. Durg has a potential to grow into a well-developed city with the ample support provided by the Government to boost its economical and infrastructural development. 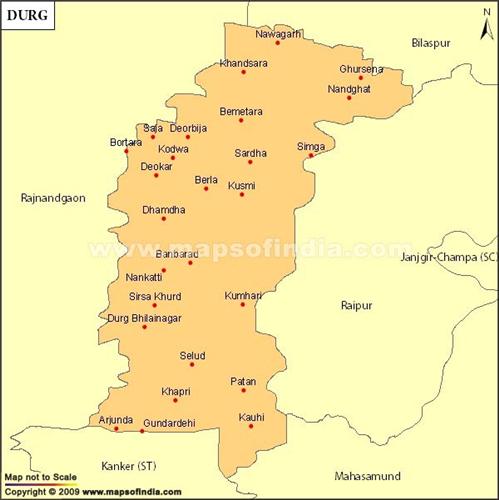 Administratively Durg, is divided into two sub-divisions called Durg and Patan. Each sub-division is then further divided into Tehsils- Durg Sub-division consists of Dhamdha & Durg Tehsil. Tehsils are then divided Blocks, Panchayats and villages totalling to nearly 3 blocks, 388 villages and 267 gram panchayats. The district being an administrative division of a state is governed by the Office of Collector who serves as the Chief Representative of the Government in a District. The District Collector is the chief custodian of law & order and local administration. A team of Additional Collectors & Deputy Collectors assist the District Collector to efficiently look after the administrative work of Durg District. The District Administration strives to provide the good civil & infrastructure facilities to the residents of Durg District, so that they can lead a comfortable & stress-free life.

Durg Municipal Corporation is responsible for:

Departments which come under Durg Municipal Corporation  are: